“Your best cover is accurate fire on your adversary.” –Ernest Langdon

Ernest Langdon of Langdon Tactical Technology brought his Tactical Pistol Skills to class to the area, and thankfully, I was able to get a spot in the class.  If you have read any of my previous class reviews, you may have noticed that I tend to seek out training from instructors who can walk the walk with equal credibility in both the “tactical” and competition worlds.  My thinking on this is that such people will have refined their techniques for maximum efficiency, but they will have done so with an understanding of what happens in violent encounters.   Ernest Langdon fits this bill.

A short list of his credentials include the following: USPSA Grand Master, IDPA Distinguished Master, winner of multiple national and world championships, service as a Marine Scout Sniper and Scout Sniper Instructor, service as an Instructor in the USMC’s High Risk Personnel Program, and a host of others. You can read his complete bio by clicking here.

The class was limited to 12 students.  Three of the students were peace officers; the rest were armed citizens who are all regulars in such classes.  The small class size allowed the instructor to observe and coach each individual student.

In some parts of the world, there are four seasons in a year.  That is not the case in Georgia. We have summer and not summer.  September here is summer.  The temperature on both days of this class topped the 90 degree mark, and day two included a thunderstorm in the afternoon that upped the already substantially high humidity level.  Not only did we get roasted; we were boiled a bit as well.  This presented considerable teaching challenges, but he handled them well, and the students all seemed quite pleased with the product they received. One of the breaks evolved into a lengthy question and answer session which I enjoyed very much.  During the thunderstorm, he set up barrels underneath our shelter and taught proper use of cover, well, he did until the rain started beating on the metal roof so hard that it was impossible to hear anything other than a shout.

The shooting drills were very much accuracy focused with a lot of time spent shooting at tiny dots painted on the targets under a time or cadence standard.  We did some work on steel targets as well.   Attention was also given to shooting on the move as well as with strong and support hand only work.

In the opening paragraph, I referenced seeking training from people who have both competitive and tactical shooting backgrounds.  As my friend Erik Lund says, “A gunfight is solving a tactical problem at speed.”  He also says that “competition process can be applied to tactical applications.”  With that in mind, there was one topic that Mr. Langdon touched upon in regard to the so-called “tactical turtle” stance that is derided by competition based shooters. I’m not going to fully delve into it at this point as I want to discuss it with him to make sure that I am accurately reporting what he said, and I have a training class upcoming later in the year with a favorably credentialed instructor who presents yet a different approach to the question, and I would like to bounce educated questions off of both individuals before putting it all in writing. If you can’t wait until then, seek out Mr. Langdon and pay for a class.  It’ll be worth it.

Finally, for you Beretta fan boys: 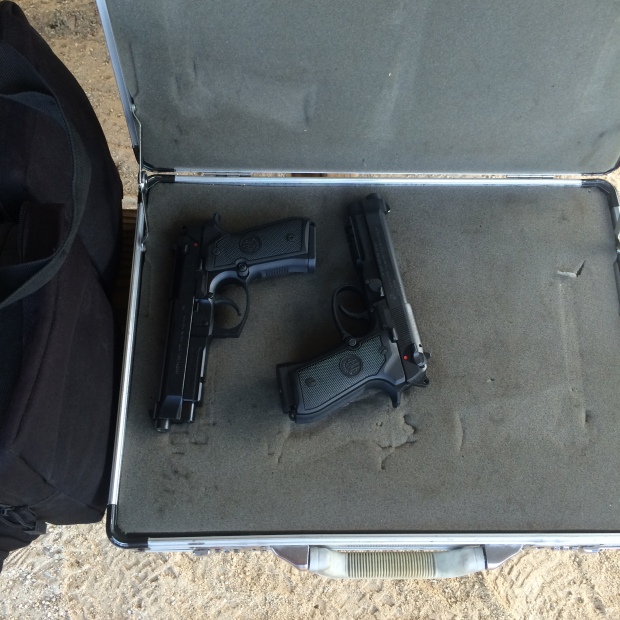