“We want to shoot as fast as we can guarantee hits.”  –Tom Givens

Broward County (FL) is home to one of the most modern indoor shooting facilities in existence.  Unfortunately, it wasn’t available, and our class was held at an indoor range built in the 1940s.  It made for a very interesting shooting experience. The class consisted of 12 students; all graduates of the Rangemaster Instructor Development Course (IDC).

The class began with a review of some of the material from the IDC particularly that we need to reject the notion of an “average” gunfight in favor of the term “typical” in that training programs should be designed around the things that we see occurring regularly.  Tom also stressed that shooting shouldn’t be a contest of a speed versus accuracy; it should be a blend of speed AND accuracy.  As he says, “There is a finite amount of time in a gunfight.  Misses won’t help you.  Misses are wasted time.”

The first range work consisted of some dry presentations and then quickly moved into accuracy and trigger control drills.  This was followed by some diagnostic drills, and then several runs on the Rangemaster Bullseye Course.  Posted below is the target from my best run, a 295 out of 300, with my other two runs being a 284 and a 288.  The 284 was my first run.  I had a good group, but it was clustered high in 8-ring and the 9-ring.  After that, I went with a “six o’clock hold aligning the top edge of my front sight near the bottom the black, and this put the shots where I wanted them. 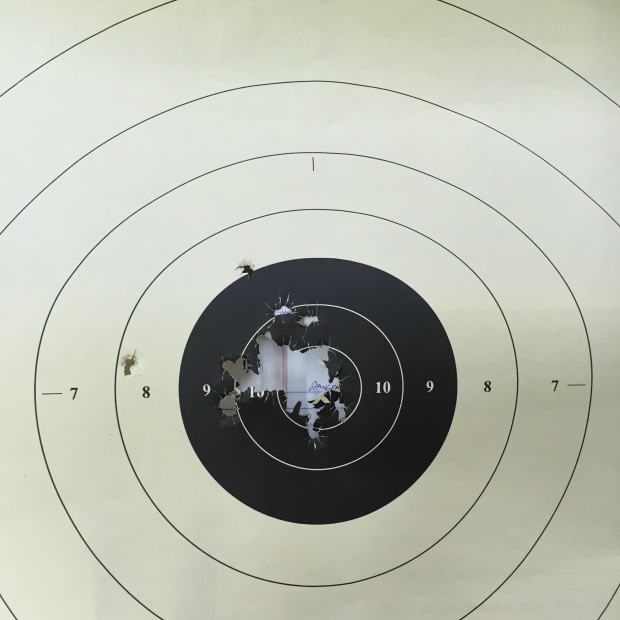 295 on the Rangemaster Bullseye Course

We finished up the shooting on day one by shooting the Rangemaster Instructor Qualification Course followed by a run on the ATF qualification course.  I really liked the ATF course.  My first run, pictured below was a 96.  The inner gray area as well as the white oval are scored at 2 points each.  The outer gray area is worth one point.  Anything outside of that is zero points.  The high shots are from the 15 and 25 yard lines.

The rest of the day was in the classroom.

My target from the FBI Bullseye Course.

After that, the pace of the shooting picked up quite a bit.  We shot a drill called the 6-5-4 Drill that required the shooter to alternate between precise shots and shooting at speed.  I really liked this drill and will be using it a good bit.  The target had three different sized targets on it.  Within a time limit, we had to put two shots on each target with only hits counting.  Following that, we shot the Parrot Drill, which is similar to the 6-5-4.  There were also several runs on the Casino Drill.

We did a classroom session on the evolution of low light techniques (and of flashlights) followed by a range session to practice them.

The final shooting portion of the class was another run on the ATF course.  I managed to pull a 100 this time.

The “Top Gun” award was based upon the two runs on the ATF course.  We had two shooters score perfect 100s on both runs, and they split the award.

The day wrapped up with some more classroom work covering target selection and design and scoring methods.

This was another great course from Tom Givens and was well worth the trip.  I picked up several teaching points and techniques and will be incorporating them into upcoming training.  I continue to be impressed with Tom’s teaching style and class organization, specifically, each of his teaching points is well thought out, researched, and explained.  There is no extraneous material.  Furthermore, he provides historical context on the development of techniques.  He also explains why there are things that he doesn’t teach and gives the context for that as well.  It is unfortunately rather common for instructors to merely parrot things they have heard elsewhere without understanding the whys and wherefores.  Tom is a legit source that not only understands what he is teaching, he knows exactly why he is teaching it.