“The situation doesn’t change because of what you brought with you.”  –Tom Givens

The setting was pristine: a cool, crisp fall morning on a private range nestled up to a mountain just outside of Franklin, TN.  The road into the range was so steep and rough that those participants driving a car had to leave it at the top of a hill and be ferried to the range by someone in a truck.  The narrow road wound through a thick stand of trees ultimately ending in a clearing containing a cabin, a barn, and appropriate facilities.

The clearing was cut by a stream, and a footbridge provided access to the range. 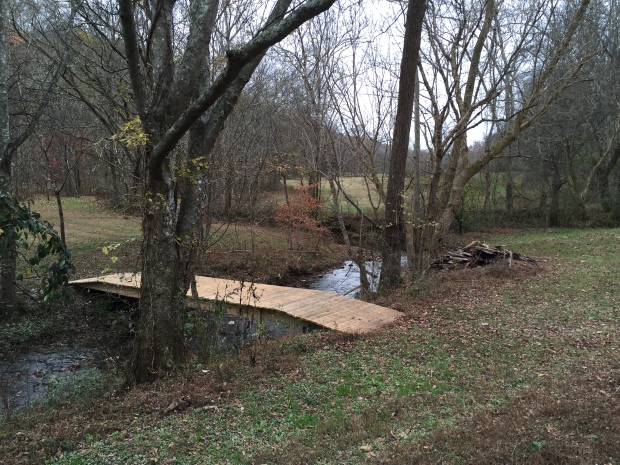 The berm was provided by nature, and the classroom consisted of folding tables and chairs.

Why a revolver class?

The class began with the instructor, Tom Givens, asking each student why they were in the class.  My answer was that I believed the revolver would soon be a lost art, and I wanted to learn the skills of running the wheelgun before the primary sources of the information are gone.  (When it comes to firearms knowledge, a source doesn’t get more primary than Tom Givens.)

I attended a regional police academy in 1999.  The academy served 10 counties, and of all of the agencies sending cadets to that academy, only two were still issuing revolvers to their personnel and only then to those assigned to the respective jails.  Those agencies have since made a complete transition to semi-automatic pistols.

My agency has two deputies that carry revolvers as their primary duty weapon.  My sheriff is in his sixth term, and one of those two deputies “came with the office”, and the other one has been in the profession for close to three decades.

It should be noted that the standard qualification course for Georgia’s peace officers is a revolver neutral course meaning that it is designed to accommodate the limited ammunition capacity of a revolver.

The Sheriff’s Office runs numerous free citizen’s firearms safety classes per year, and revolvers are common in those courses; however, this is mainly due to their being inherited nightstand guns or because husbands, boyfriends, and gun shop employees are an unwitting anathema to ladies.

In the section above, I mentioned that the instructor wanted to know why we were in the class.  As to why we should learn to run a revolver, his answer was simple: it was so that we could demonstrate why not to choose a revolver as a primary defensive firearm.

It is a very common misconception that revolvers are more reliable than a quality semi-automatic pistol.  In truth, they are a much more complicated piece of machinery.  When they do malfunction, it usually takes time and tools to fix them whereas an immediate action response (malfunction clearing technique) typically fixes the problem with a semi-automatic pistol, and this usually only takes a few seconds.  Such problems with revolvers happen much more often than revolver aficionados will admit.  We had three instances in which wheelguns in the class failed to the point that they had to be taken out of action, and this mirrored another recent class taught by the instructor.

According to Tom, the old saying “six for sure” referring to the reliability of wheelguns actually hearkens back to the days of mercury based primers when ammunition was so unreliable that misfires were expected, and with a revolver, the shooter simply pressed the trigger again to rotate to the next cylinder rather than clearing the malfunction.  Mercury based primers haven’t been used since the World War II era, and this issue is now moot.

Tom Givens demonstrating what the gasses from the cylinder gap will do. He turned the target and held the revolver along side of it and fired a shot.

The quote at the beginning of this article holds true.  The situation doesn’t change because of what you brought with you.  Carrying a five or six shot revolver isn’t going to limit your problems to those that can be solved with such a tool.  In over 40 years of teaching firearms and researching the subject matter, the instructor hasn’t found any documentation of anyone being able to successfully reload a revolver in a close range gunfight.  He contrasted this with prolonged, barricaded gunmen situations.

The late Jim Cirillo, member of the NYPD Stake Out Squad, is famous for his answer when asked about his preferred revolver reload technique: grab another gun.  This has come to be known as the “New York Reload”.

I tested this on one of the timed drills, and I was faster by several seconds in getting a second gun into action than I was in reloading the primary.  Of note, the two revolvers combined have less capacity than a single Glock 19.

A fellow student accessing a revolver in an ankle holster.

Some of the students shot the entire class with a service sized revolver, but some used either a small revolver or alternated between the two.  Attention was given to drawing from the pocket as well as an ankle holster.  Staying true to the theme that “the situation doesn’t change because of what you brought with you”, the time limits on drills and courses of fire where not changed to accommodate those carrying in an ankle holster.

As usual, Tom was a gold mine of information.  In my brief stint of shooting IDPA, I dabbled in the revolver division and even managed a match bump with my wheelgun, but I was always inconsistent on my reloads.  One nugget from Tom resolved that issue (take the class 😉 ).

The class did just what I hoped it would do in that it provided exactly the experience that I was seeking.